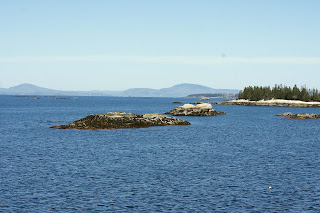 Welcome to the Vinalhaven Sightings Report – May 19th, 2018


Brought to you, in part, by the combined support and efforts of Vinalhaven Land Trust and Maine Coast Heritage Trust 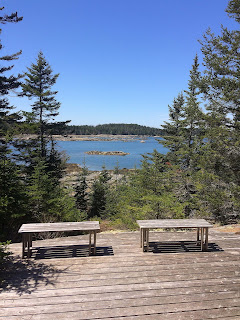 Business: Upcoming event – This Friday! May 25th – 8am at Skoog! VLT’s Warbler Walk with local bird dude (and legend) John Drury! The timing is right, the birds have been flowing through and the warblers are ready to be observed! Join John for two hours of pure “warbler bliss” (it is a thing) as he takes you on the ultimate spring expedition – to warbler world!

Contact us – vinalhavensightings@gmail.com is the place to send photos, stories, attitudes, and email address to join in the fun of nature sharing. It’s a good time, trust me….

Tiit Trick – click on the photos to make them jumbo-like!


Kid Stuff – Perspectives after school – May 8 and 9. So the weather was warm (a little too warm for some coffee drinkers) and the kids were psyched for some pond scooping and egg finding last week. With the warmth the green frog tadpoles were active and for the first time ever every kid caught something in the ponds – even the kids who weren’t trying hard!


The spotted salamander egg masses put on their show and the afternoons were full of laughter and playful banter. To make things even better – special guest leaders – Jim and Colleen Conlan came for the Wednesday session. Super good fun! 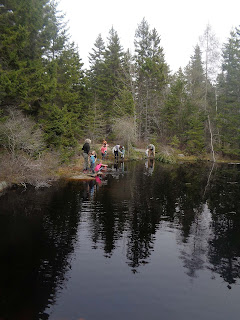 Definitely want to take a moment and thank all the cool folks at Perspectives, PIE, the Vinalhaven School, MCHT, VLT, my mom, our cat, and anything else that even remotely was connected to these fun sessions. Looking forward to next year! 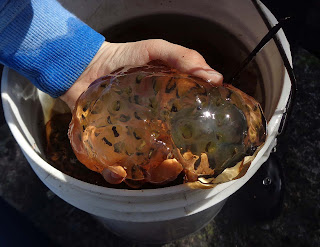 Cozy Osprey – they’re back! Osprey are back and active around island. Keep your eyes and ears open! Here’s a shot Cay Kendrick sent in – photo credit goes to George – of a pair on lane’s nesting by Boy Scout Point. The pair have used the nest for years – we look forward to hearing more about how the nest use develops this year!

Cay also report a Brown Thrasher from her yard – first one she has seen there. Also Kingfishers have increased activity over in the Indian Creek area. Thanks for the report!


Ferry Rides – (5/8) while checking out the harbor seals for any obvious sign of any impending birthing sessions I laughed hardily out loud when I spotted this eagle that was apparently eating a seal that had (maybe) washed up on ledges. Maybe it’s a fish, hard to judge from the quick 6 second view I got or from the photos. I always enjoy celebrating an animal (in my head) and but then it’s even better to see it being eaten by another. Way to be part of the food chain!


(5/16) -  50 + Purple Sandpiper – how long will these guys stick around? Miles to go before they sleep…or breed! Little balls of feathers on rocks always puts a smile on this bald observers facehead.

(5/17) – Harbor Seal with pup. After a day of scanning and searching from the ferry and around the Basin, finally spotted a brand spankin’ new pup following its mom around the ledges outside of Lairey’s Narrows. Multiple pups around now no doubt. Keep your eyes open for little heads following big heads (seal heads that is) and for the “magical T” formation on ledges of pups nursing their moms.

Basin – (5/16) Dogtown access - The only good squirrel…. trailside in the Basin Preserve. On the way to Mack’s Pond. He’s still there to ward off any wayward squirrels – go check it out!!

I have been enjoying tracking woodpeckers the last few months, with individuals pecking close to the base of trees or even on exposed roots to access “yummy” grubs and the such. While walking towards the platform I was looking down – for safety – and spotted a scene of intense wood chippin’ (or peckin’) chips all over the place. I looked up to find myself under a birch with sizable birch polypores.

and a fresh cavity opening right under the top polypore. check out where the bark is rubbed by the woodpecker tail when it would lean back from the opening. so cool 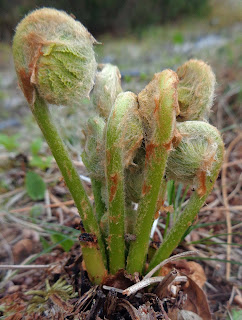 (5/17) - Wharf Quarry Road/Williams trail system/Basin Preserve – A saw-whet owl was beepin’ its little heart out just past the wetlands, just past the MCHT parking area. It must have been able to see the parking area from its perch, as it would stop beepin after I took like 5 somewhat quiet steps down the road. As soon as I returned to my vehicle – and the ever-brewing coffee scene there – it would start beepin’ again. This happened about 5 times before I decided I had to move on with my day. And the coffee was ready. 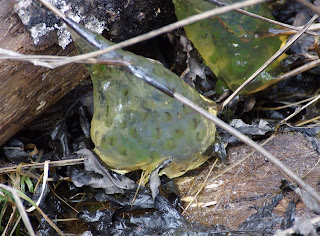 (Another) Otter trailside latrine attraction. A local otter decided recently – within the last week – to mark along the Williams trail close to where the trail crosses a seasonal creek. This is classic otter behavior – at least for the basin – as all human trails that cross even the smallest of creeks (along the eastern shore of the basin) now have had an otter mark trailside. They may not mark it every year, or even every ten years, but a message has been left for users, and this one has been happily received even if it’s a message of spraint. Whether these messages are left for dogs, humans, other otters, or all of the above is up for debate, but what is clear is that this otter was announcing its presence with authority. Nothing says “authority” more than a brown out, mound and spraint right next to the trail!


Off island, but might be around island – scarlet tanager in the yard reminded me that red is a nice color. 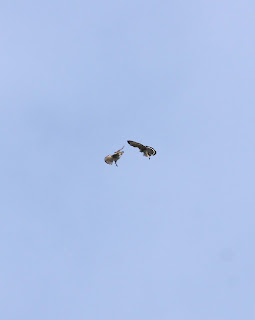 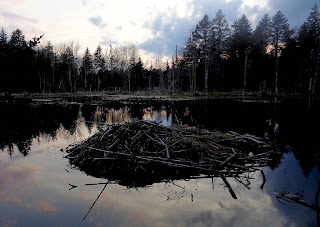 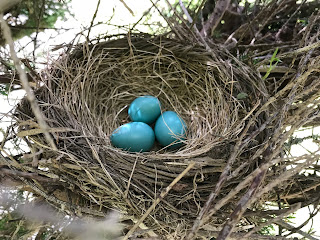 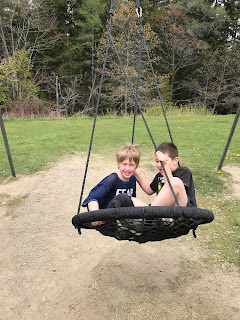 Leif having fun on the new swing at st George school. 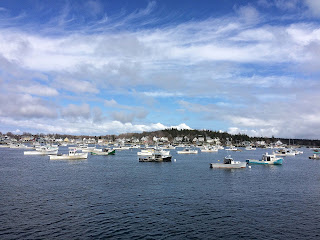 Welcome to the Vinalhaven sightings report – May 6th, 2018


Vinalhaven Land Trust and Maine Coast Heritage Trust – we salute (and thank!) you!


Highlights – songbird migration! Warblers and the such! Saw-whet pellet, red crossbill with young, springtails, otter stuff and sighting from the ferry


Business – contact us! – vinalhavensightings@gmail.com – send in your photos, your stories, your email addresses and bask in the glory that is the Vinalhaven Sightings Report


Tiit trick – click on the photos to jumbo-size them! It’s fun and is mostly painless


Upcoming events! – Warbler Walk! – Friday May 25th, 8am – meet at Skoog Park to carpool. John Drury will be leading a two-hour outing to check out what warblers and other songbirds are “passing through” or “setting up shop”. Migration is the best! Enjoy it with some tweeters!

The story here….is many fold. The 15 second interaction I had with a family of red crossbills was priceless. Long enough to hear them coming, see them land, hear the young begging, watch the adult feed and then have them take off. Whirlwind! If I had been distracted by anything else I would have missed for sure. Makes me wonder what I missed by being distracted by the red crossbills! Songbirds already fledging! Take that!


Saw-whet owl pellet was cool, looked as if it had been there for a while, yet still had enough fuzz and bones to clearly be a pellet. Right on the trail! Apparently, it’s a good place to regurgitate!


The spotted salamander egg masses can be seen from Wharf Quarry Road, just past the MCHT parking area. The first wetland zone on the left (south) side of the road – will be there for the next few weeks! Fun to watch them develop!


Basin – (4/30) Platform trail – it was springtail time in the basin! The focus seemed to be largely on one root just past the second bridge section. Check out this video to see what I am talking about! My apologizes – I zoom out at 10 seconds and thought the video would focus on its own – it doesn’t! check it out!


So that is like an enormous number of springtails. That’s cool – but what are they? Springtails have their own order in the insect world – Collembola. There are about 6000 species worldwide, and in my judgmental noggin’s opinion the most popular and regularly noted springtails around Vinalhaven are the “snow flea” (found on snow on warm winter days) and the seashore springtail (found in tidepools during the summer).


“they (springtails) are part of the decomposer community”


“most springtails eat bacteria, fungi, lichens, mosses, pollen, or decaying vegetation. Others are carnivores and prey on small invertebrates” 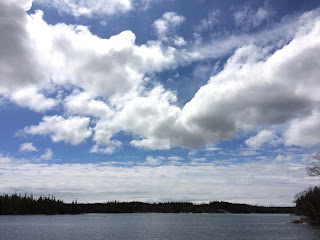 “Springtails “jump” by means of modified abdominal appendages. A forklike structure called the furcula is attached to the rear of the abdomen and held in place along the length of the abdomen by a post like retinaculum. When released by the retinaculum, the furcula quickly snaps out and backward, launching the springtail into the air”


In other words, they eat the little things and then bounce around by their spring-loaded abdomens. Or something like that! See them every now and then, but when you see them in such numbers it hard not to be impressed.

Skunk cabbage is big and green these days. Almost tempted to munch on some! But not really….

Winter Harbor – (4/30) Jane Arbuckle stirred up an American Woodcock while searching for a boundary pin. The only evidence of the encounter left behind was this impressive pile of woodcock poop. I guess they really do poop their weight in digested worms every day!

From the ferry – (4/30) Steve Walker spotted a river otter in the ocean (what part of river does this otter not understand) by the ledges outside of Lairey’s narrows. With local dens on both Lairey’s and Leadbetter Islands this area seems prime to look for otters while folks are looking for seals and eagles and whatever.


Seal pups should be popping out soon! In the Basin somewhere around the 15-17th of May traditional has been prime pupping season. Look for the little grey ones from the ferry as well!

Off island – Tenants Harbor – Beaver session – crepuscular with mammals is fun, most recently in the Marsh near our place I was taking photos of this beaver passing me by while I was on shore. My camera is loud – no doubt about it – and I think the noise distracted the beaver enough that it made a pass – came really close in fact – slapped a few times to let everyone and everything in the marsh know I was there – and then headed off on its merry way. I love you too! 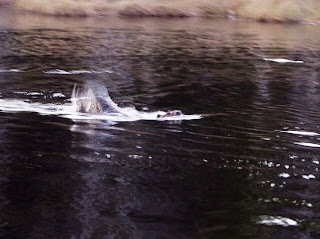 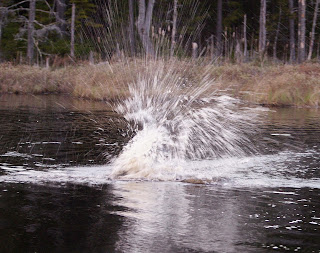 ﻿ Tenants Harbor – vernal poolin’ with friends. Headed out to the long cove region of Tenants Harbor to see what the egg status is in some pools on MCHT land. Did not disappoint – and a morning with Reid – he may look familiar, spends a bit of time on island – Drew and Andy and found 57 or so egg masses on one property, and then another 50 or so at another old quarry spot. Looking forward to perspectives this week! Eggs will be “a-plenty!”.