Brought to you in part by VLT and MCHT

Highlights – urchins, Great horned owls, otters, eagles, woodcocks, spring peeper, red crossbills, and so much more (well, not that much!)

Business - Note on winter – I guess there was blizzard like conditions monday, but really - was that it for winter? Wow, first winter on the mainland and (so far) the meat of the season has not been overly impressive when considering traditional “wintery” condition definitions (judgment). (Just kidding (for the most part)). March has come in like a lamb (chilly one at that) and possibly may leave like a ka-bob. So it goes. Maybe another snow or two. That would be nice. Anyway, just a couple of weeks left of winter, enjoy it while you can!


﻿﻿﻿
Upcoming events – Woodcock Walk – classic outing at lane’s – Saturday April 9th at 7pm. Come on out to look for the aerial courtship display of the “coolest shorebird that doesn’t live at beach”. Please dress appropriately (this is not a clothing optional event!), woodcock “walks” are not active at all. “Walk” is not the right word at all. More on this next time…VLT/MCHT event! – this just in – as Amy Palmer predicted…Woodcocks showed up in the yard this week! Well, the soccer field below our yard, but close enough! Welcome back woodcock friends!

Basin clean-up – Saturday April 9th. Come, chip in, and let’s see how much trash we can remove.  More info next VSR.


not sure why those colors showed up with John's report.


Urchins – State Beach - Gabe Peter-Harp reports finding a gold mine of urchin “tests” (the round part where the pokey things stick out of). 42 intact urchin tests/shells were found under trees along the trail thru the island forest. Intact with holes in them, the insides had been eaten for sure. Raccoon? Gulls? Crows? Island Gnomes? Either way urchins are either not rare, or have gone extinct from the experience.

Long Cove – Red Crossbills – Everytime we go we hear/see them. Apparently the islands are where crossbills (or crossbliss) are being reported. Like Vinalhaven and Frenchboro. 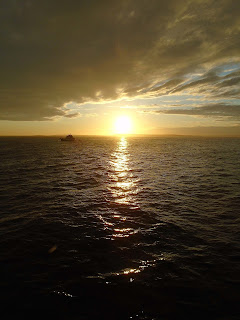 Another island, another otter – (2/26) - and so there is this “thing” out there called the “Maine Land Trust Network” or MLTN (mltn.org). It’s a good place to go to see what jobs are out there, but MLTN does a number of other “things” as well. One of these “things” apparently is providing a forum where a land trust that might have a concern or a situation develop can reach out for perspective from folks who may have experienced something similar. (What a boring sentence that last one was). Anyway, it seems like a good thing and is run by MCHT, so I probably should say it’s a good thing. There, I said it. I think. It’s a good thing.

Anyway, a few weeks or so ago Stephen Miller from Isleboro Islands Trust (IIT) reached out thru MLTN with a  concern about a new trail that IIT had put in over the winter. Turns out when “they” (the royal “they”) built the trail, a dog came along for the day. At one particular spot the dog became focused on and consumed with a hole in the ground. One thing led to another, a game camera was put up and an active otter den was documented. The otter den was like, right next to the trail. And the dog’s reaction was classic dog. It was like the odor of otter spraint and anal slime was so overwhelming that when it tickled the olfactory corridors of the dog’s nose it inspired a crazed and insatiable canine state of mind where the otter just “had to be had” (possible exaggeration).

‘Regardless of whatever really was reality”, after a trail camera captured several photos of otters active at the spot concern grew over impact that the new trail would have on this (at the moment) pretty active otter site. Valid concern. Folks may be familiar with this, but back when the VLT’s Granite Island trail was constructed it was routed in a way to give an active otter den a wide birth, as well as by- pass a wetlands and other “assorted reasonings” (good word!).

(2/26) After a short ferry ride to a pretty long island we (the royal “we”) hit the beach and it didn’t take long to cross paths with an otter’s tracks and trail. It had been left that morning, heading up the beach, over a bank and into a fresh water pond/wetland maybe 50 feet away. We followed the trail up to the first view of this small pond, Lawson quarry size (overall) maybe but with lots of deep tributaries and fingers that feed into the main small pond.

Anyway, the view across the pond was maybe 100 ft and as clear as day the cattails on this tiny island/hump close to shore across the way were completely matted down. No other matted cattails were observed. When I pointed out the otter sign Stephen said that was where the den he was concerned about impacting was. “Good for you” he said. I was feeling the same thing. It is good.

To make a long story short, we walked around this entire pond wetlands complex, crossed several of these 10-20 feet deep tributaries with trees washed down them. We walked whatever trail was closest to the shoreline of the pond. 14 latrines (a large one out on a separate island) and 3 more dens (4 total) later the habitat was summed up as “otter city”.

The three dens we found were very cool, all were old, abandoned beaver lodges along the banks of the pond.  A few organized sticks were found at each spot, but little else said beaver lodge. The otters would’ve used whether the beavers had lodged up there or not, the banks apparently very suitable for resting dens. I have not found otter dens in old beaver lodges before. I was very psyched. 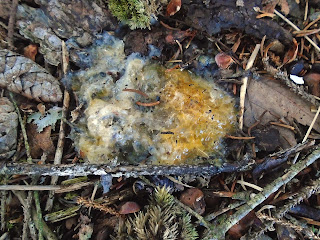 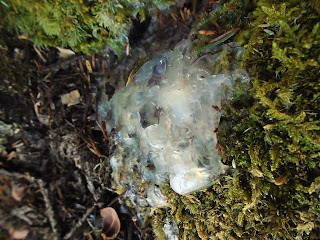 Anyway, it was fun get a little bit more information about the otters of coastal maine and to check out another great Maine island. Check out the IIT website for more information about the island and events taking place out there- http://islesboroislandstrust.org/ . On July 30th! – Mom’s B-day! – I’ll be leading a walk around the pond looking at otter sign. That will be the spraint!

getting his yellow belt...


see you out there!