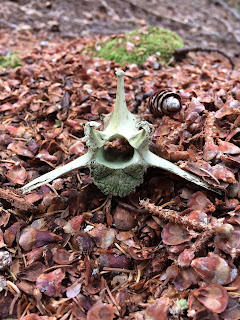 Welcome to the Vinalhaven Sightings Report


Brought to you with the support of VLT and MCHT


Today is Halloween! Be safe, but also remember you get to scare the bejeezus out of people. On Halloween it’s cool. 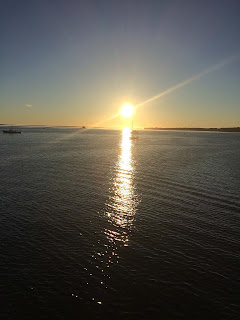 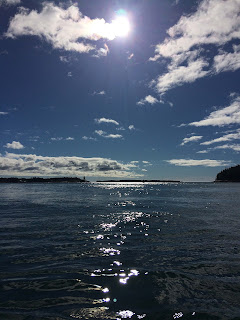 Business – PSA – hunting season is here! Kid’s day (one of the three scariest days of the year – fact!) has already come and gone. Do yourself and everybody else a favor and put on some ORANGE please! Hats, coat, Hunter Pence visitor jersey – whatever. If you are out in the woods, or outside at all hunters are expecting those who venture out to have orange one. Safety first!

Contact us with sightings, photos, questions, concerns – vinalhavensightings@gmail.com . All levels and kinds of inquisitions are welcome!

Tiit trick – click on the photos to enlarge. If life were so easy! 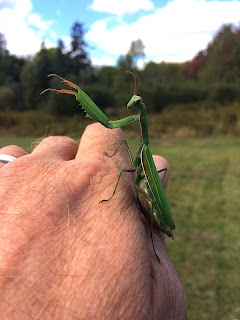 Couple recent dragon articles to check out if you’d like, or if you dare!


Sightings! - (Somewhat recent) Historic from the Skua – Captain John Drury was kind enough to send in a few shots of Parasitic Jaegers from the last few months or so. Great stuff and great tours! More on John’s blog – sightingsfromskua.blogspot.com – lots of photos capturing the "pelagic lifestyle" that so many of us (the royal "us") strive for.


Also from his bird bath. Thanks for sharing John! 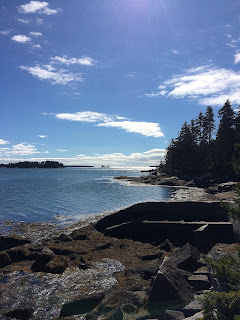 Story here – best conditions for observation – overcast. Lots of surf scoters already in the thorofare, captain Pete mentioning a group of White-winged scoters heading south during the first ferry run was nice to hear. And it was nice to see Pete. Apparently he went north this summer – looking forward to some photos from that adventure. 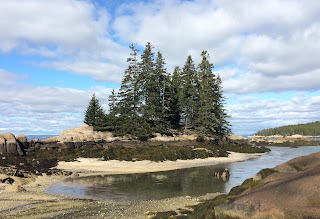 The story here – loons in the air after a good storm the day before, few birds out on the water

The many stories here….I think that it is safe to say that roger the red-belted conk is done in its incarnation on a spruce snag along the Huber Trail. What I mean by this, is that regardless of what powers (or hands) were at hand when gravity finally beat the robust RBC. Maybe it was completely natural, which begs the question – if a hug red-belted conk falls in the woods and nobody is there to hear it, does anybody care? The answer is always yes, we do care….. 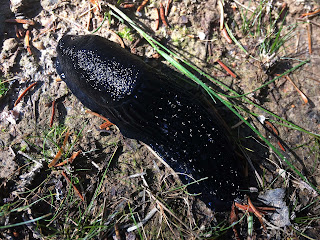 anyway, the first bufflehead of the season for me was cool. Zero surf scoter might seem a little funny for seal bay - which is known for impressive surf scoter congregations and with all the scoters seen up on the thorofare recently. Seal bay is a late winter congregational zone, or at least that’s when seasonal numbers can peak at over 150 scoters, come back in March! The saw-whet owl when I almost back to the parking lot was a real treat. It reminded me that saw-whet owl migration peaks sometime in late October and that Huber is somewhat famous for saw-whets (at least in my mind!). Do you remember when those saw-whet banders caught 26 juvenile saw-whets in one night close to the parking lot? That was a happy night for the researchers. And for the owls. Probably not actually.

The story here is the yellow-latex milky – a poisonous lactarius – which is cool. And the otter stuff….new marking areas (for me), including one that appears to be at the start of a cross island trail. Historical den is still in use, and several new latrines full of mounds and spraint were to be found.


﻿
Spiders – I have crossed paths with more wolf spiders than I can remember in the past. I even got bit by this one while trying to manipulate its stance for a better picture. What an idiot I am messing with spiders! I hardly cried with the bite…. 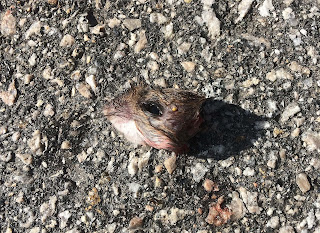 Roadside lessons – found this head up on North Haven road just past the turbines. Not sure what the story could possibly be here. Silly predator – everyone knows the best part of voles is the head! 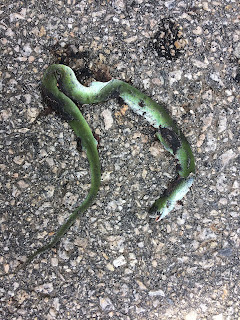 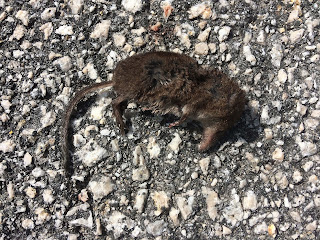 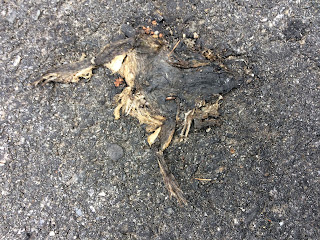 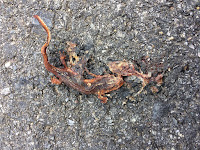 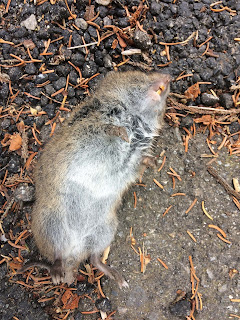 Even freaking woolly bear caterpillars are getting crushed! 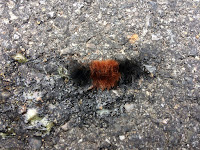 Mushrooms – bolete exclusive – Lilac-brown Bolete (Tylopilus eximus). We (the royal "we") found a nice little patch of these ty-lo-piles by Folly Pond while in a phone meeting.

They are so thick and meaty and violet. We love them. Enjoy the shots….

Artist’s conk before it completely covers itself with rusty spores…

A sharp- scaly Pholiota telling us who’s decomposing this log…


…. And of course turkey tail has been blooming here for a little while now…..

Lobster mushroom – so psyched to find these dudes again this year. It’s the mold that changes this russula from an edible white mushroom into "a choice edible orange mass of bliss". Leif and I picked these thinking we were going to feast, but something about the texture and look made us decide to appreciate with our eyes and not with our tummies.

Finding these down the road inspired a new super hero though – lobster man. His catch phrase is "I’ve got mold baby". And then "just being honest". Lots of potential there!

And even some fresh wolf’s milk slime, so fresh some is pink and some is grey, fun to find them in transition…


On the mainland – 10/26 – a day after an impressive (am I impressed too easily? I don’t think so, but sometimes I wonder) 2 inches of rain the day before Shaggy Manes popped up in several yards in St George and other areas. One yard on 131 had to have had at least three hundred (conservation estimate as always) in it – thanks to Steve Barnes (good man. He’s a library guy, need I say more) for the hot tip on that yard. The ones I watched in my neighbor’s yard were just a small handful. Here are some shots. I wrote a dragon column about them and will pass the link along when it is posted.

Had to go back to Megunitcook Lake (pond?) to retrieve a water bottle that had been left over the weekend during a cub scout exploration. Got to explore by myself this day, I never have a problem with that.

Pretty stoked on these moose tracks. Somewhat fresh and just impressively large. Otter tracks mixed in with the moose tracks thru a wetlands close to the picnic tables at the tip of the neck (that didn’t come out right). It was an otter sign hunt that turned into a small stretch of moose tracking. Quick search under the big ol’ white pines turned up this sizable pellet. The scat associated with the pellet was owl (for the umpteenth time, owls don’t lift their tails when they scat so their scat is more of a splat than a "2-6 foot line of bliss" as no one calls an eagles scat). Anyway, great horned would be my guess. The rodent skull is larger than any other rodent skull I have found in a pellet before, which got me figuring muskrat. Since then my hopes have turned to the possibility of the skull being from a red squirrel. I have never found a squirrel skull in a pellet before, and if this is the case it gives me hope for the world. I won’t know until I dissect it with the scouts this week. We’ll keep you posted! 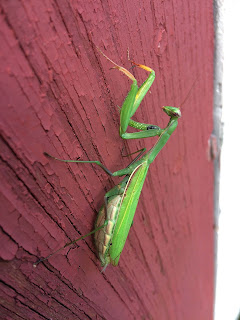 More praying mantises – not sure what the deal-ee-oo is but I have now seen 6 mantiseses which is more than I have ever seen before. I even had a neighbors little girl tell me about finding one at school. Is it location? Are folks seeing many mantis this year? Silence does not necessarily mean none are being seen. Just none reported. Have you heard fourth hand rumors about a stranger seeing mantis on island? if so we are interested in the info! 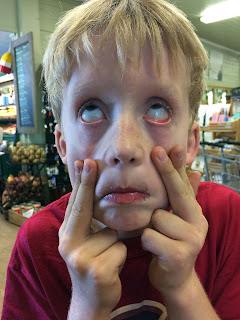 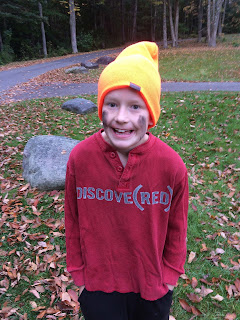 And of course there is Leif – camping, paddling, and getting into that Halloween spirit. 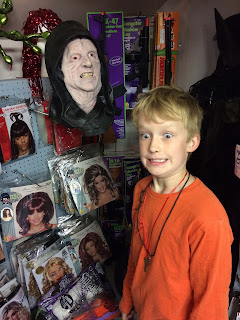 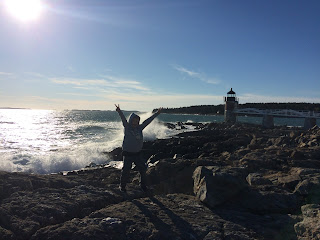 Enjoy and see you out there!
Posted by Kirk at 1:10 PM