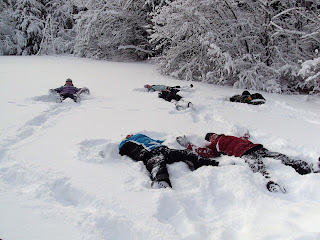 It's been great. Kids making snow angels.If you would like to share your best snow shots, send them on...

just a quick note and a few pictures. – seems like anyone who spent some time in the woods this fall has noted what an exceptional year it was for fungus. Edibility was an afterthought as the trails were lined with waves of colors and textures. After last year’s low mass this was a nice fungal rebound that created a buzz in the woods (and around town) starting in July. And just when you thought things couldn’t get any better, the wonderfully pleasant fall we’ve had has provided a heavenly mix of timed rains (at appropriate locations, and in desried amounts) with epicly sunny, warm (a bit breezy) days. Perfect conditions for fungus -inspiring many that I hadn’t seen in my 6 falls of mushroom finding out here to state their presence with authority and bloom into the best fungus season I’ve experience on Vinalhaven. (Doesn’t say much as it was only my 7th but still.) Within my limited data set I’d say it was “exceptional” year. And While not going into detail of the season, I did have a few favorites and a story of a visitor who boldly states - “I’m 99% sure these are Chantrelles” - only to have 2 bags of False Chantrelles dumped onto my kitchen table, with 2 real Chantrelles mixed in.  I hadn’t seen False Chantrelles , or Kuld-kukeseenik (Estonian), on vinalhaven before, and they were everywhere this fall  and continue to be seen into November.
The Oyster Mushroom, or Austerservik (Estonian) can be bountiful  in June on the big-tooth aspen
in Acadia National Park, but I had not found it anywhere on Vinalhaven until (10/28) in the Basin.

Also found in the basin is Hemlock Varnish Shelf, growing on a Hemlock, the only ones I’ve found on Vinalhaven (low number of Hemlocks may have an effect on HVS numbers)…
Boletes are always a treat to find and this year was a good bolete year for sure. Certain Boletes stain blue when torn/scratched, I’ve included a shot of a Red-mouthed bolete  where some vandals had scratched in “Bolete” into the cap which then stained blue. We do not advocate this kind of behavior as Red-mouths are poisonous and not a fungus to mess with.  I’ve also included a cool shot (judgement) of a Blue-staining Bolete that must have been kicked over or something in the trail and where the pores are clearly stained blue. Blue staining Bolete is a good name for it.  This is hardly a scratch of the incredible fungal scene out here this year and along the coast. Hope you got to be out there and enjoy it….

“Sandhill Cranes & other big waders” – Sylvia Reiss from over on City Point Road reports that she and a few friends witnessed 2 large birds flying westward by their place around 11am on Sunday June 13th. “Necks and legs fully extended like sandhills” is the quote and Sandhill Cranes are apparently just what they saw! The pair of Cranes had been observed in a meadow on Greens Island that morning where John Drury got some great photos before they took flight. Not so amazing tracking has the two flying up the Reach, past Sylvia’s, and then banking north to the North Haven golf course where Terry Goodhue nabbed some photos of the birds the next day. Great sighting! That’s 3 sandhill cranes for john in a 9 month stretch.
Posted by Kirk at 3:09 PM