Welcome to the Vinalhaven Sightings Report – May 20th, 2017
Kind support for the VSR provided by VLT, MCHT, and U!
(You probably didn’t even know it!)

“long overdue” happy mother’s day wishes to all the mothers!..... 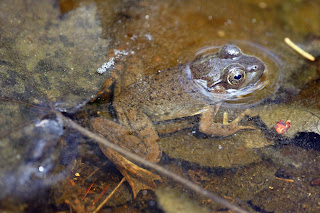 Business : - contact us! send us your sightings! Your photos! Or your email address if you want to get an email announcing each new post (it’s not too annoying, once every two weeks or so).


vinalhavensightings@gmail.com! Complaints can be sent there as well. Bring ‘em on!

Tiit trick! – Click on the photos to enlarge. Make them jumbo why don’t you! Best view available! Wish you were here dad!

Take this foam photo for instance, click on it if the foam isn't big enough for your taste! see...wasn't that fun? 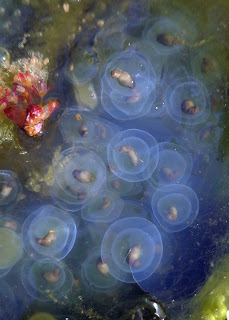 Kid stuff – had a great couple of mornings (5/9 & 10) up at the Perry creek preserve with the 4th and 5th graders! We ventured off trail and explored wetlands after wetlands for 4.5 hours each trip and ended up discovering (for us) a world full of spotted salamander sign. 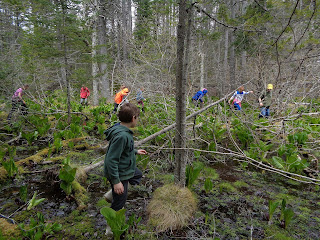 As reported in the previous VSR , North Perry Creek Preserve is home of one of the two (or three) most famous vernal pools (spring pools that dry up at some point) on island – “the mother lode”. The mother lode is famous for hosting over 200 set of spotted salamander egg masses each spring. And sure enough with the kids counting we came up with roughly 200 sets again this year for the pool! 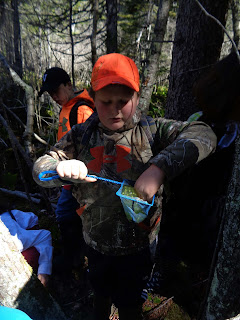 From there we “hit the wetlands” and scooped and searched each and every wet spot that could possibly support eggs.

all in all we searched 4 wetlands over the two days – all 4 wetlands were somewhat close to the trail and between the N Perry Creek parking area and the mid-creek/ridge trail split – maybe ½ mile down the trail.

the group on (5/9) searched 3 of the 4 wetlands and came up with roughly 500 sets of egg masses found. Ever had a 500 spotted salamander egg mass day before? I hadn’t! it was epic.

the next day there was partial overlap and the group searched 3.5 of the 4 wetlands, with several in the group claiming they had seen over 600 sets of eggs that day – which is totally possible and even probable.

What makes things even better is that there are probably about 260 male spotted salamanders in the same area, and who knows how many juvenile spotteds!

So these dudes must be everywhere at perry creek, the place can be literally crawling  with them….and so I have to ask, those of you who have walked the trails there, maybe know them “like the backs of your hands” – have you ever seen a spotted salamander at perry creek? I hadn’t until a kid named Parker turned over an old bucket in the woods and found one underneath. 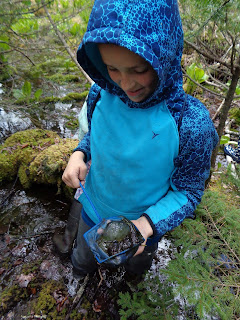 And so where are they? Other than everywhere. It is known that spotted salamanders can travel over a mile to vernal pools to mate (average about 700 feet), but at perry creek there are vernal pools everywhere, its hard to imagine a salamander traveling too far to find a vernal pool.

And so they are in the ground, under rocks, under old chum-buckets (apparently) under logs and just about everywhere.

We (the royal “we”, as I found nothing these days”) found one live spotted salamander, 1 dead salamander and this incredible cute red-spotted newt in its red eft stage. So exciting to see all these masses. Perry creek preserve is full of masses! Cool to know they are out there!

Sightings….Orchard Oriole – Skin Hill Sally was kind enough to send in these photos of two first year male Orchard Orioles that spent a day in her yard maybe a week ago at this point. Sally was concerned that one of the Orchard Orioles wasn’t able to fly as it seemed to be struggling. The bird was not seen the next day, which might mean one of a few things…and hoping it survived, maybe the bird was just purely exhausted and its wings were fine. I mean, the wings worked when it flew out to vinalhaven…anyway….


…Hillary Bunker reports a first year orchard oriole has been coming to her berry suet feeder since the weekend! Not sure if it’s still around, but three orchard orioles on island is huge. Not sure how huge or how one would go about measuring the hugeness of the whole thing, but it’s pretty fun and cool nonetheless!

When we last left….”the woodcocks on greens island” – report and photos from John Drury -


Yes, there were eggs, and a female who was working her camouflage “to the max” as Moon would say…since then there has been a flutter of activity that has resulted in some hatching…lets take a look at the eggs….

And this adorable (judgment) baby woodcock that undoubtedly came out from one of those eggs! Awesome shots and awesome timing…Good work John…

Also from John, a photo (below) that acts like a reminder – Ancient Murrelets are John's "favorite fowl". WE (Royal anyone?) here at the VSR highly advocate playing favorites whether it’s with birds or children! We like favorites and that is why they are our favorites! 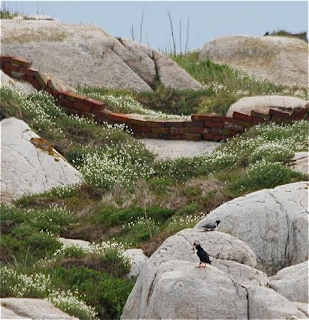 Anyway, it's incredible to have an Ancient Murrelet at Matinicus Rock (wasn't there one last year on seal?) . And great to have the red-billed tropicbird back in for a 13th consecutive summer in Maine! And now would be a good time to remind people that if you are looking to look for the Red-billed tropicbird, great cormorants, Harlequin ducks (25 at little Roberts last week), Puffin, Razorbill and a spraint load of terns, John Drury is the man for you to contact. Check him out at - sightingsfromskua.blogspot.com – to get more info and to make your reservation today! 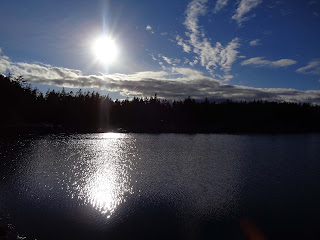 …story here was the Wood Thrush – only the second I have heard on Vinalhaven. And then I heard two different ones on bike rides over the next two days in st. George. Wood thrushes are cool and remind me of my friend Jim in Ohio. The wood thrush is the district bird of the district of Columbia. Maybe there was some wave of wood thrushes recently. Anyway, they are cool.


here's a video of flies and carrion beetles working over a chunk of bird that was left over from the alledged owl kill at Huber.....

When I went out to lane’s on the 17th I went out to the sunset rock because I had gotten there a little early for owls. They were the hope, but the eiders and woodcock were plentiful entertainers….

The eiders were originally on some ledges but jumped in the water when I was still plenty far away. I wouldn’t say I felt bad, but when I realized that my humble presence may have influenced their behavior I said out loud ….. “that’s too bad” … because I was plenty far away!

As it turns out the pair almost immediately started to mate – no ducky, spinning around in circles bullspraint courtship! And with a quick hop on the back things took off…. 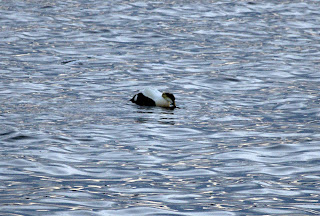 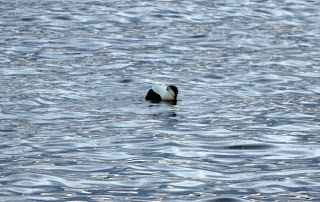 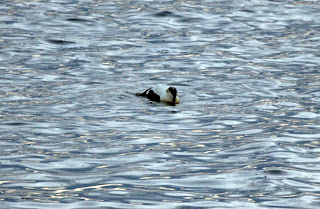 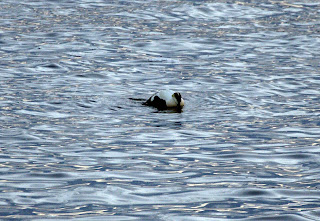 …. And in the end I didn’t feel so bad that my
humble presence might have had impact on these eiders. And that feeling is purely anthropomorphic. It would be cool if my  presence led to their mating, but lets be honest...
they were good to go all cloacal even before I got there!

The decay of roger – everyone’s favorite island mushroom, Roger a red-belted conk, on the Huber trail does seem to be coming close to the end. The ironclad beetles were out in force munching on its pore layer (not something friends do necessarily) and its color does not look fresh. What an awesome mushroom….

Blowing of the cup…..- here is a video of an orange peel cup (mushroom) dispersing spores. The dispersal is triggered by wind, and in this video I mimic the wind with my hot air. Unfortunately I blow pretty loud over the camera and the sound that is captured is kind of annoying to me (judgment).

Anyway, you should turn your speakers down now…. 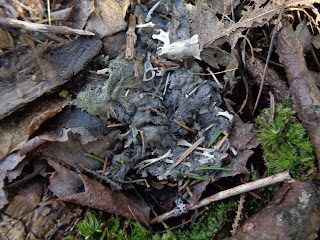 off island - found three barred owl pellets in St. George the last couple of weeks and each have had shrew skeletons in them. big ones too. 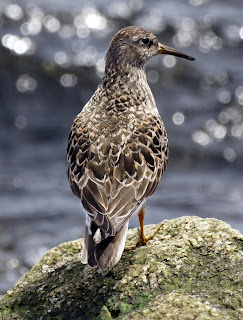 Rockland Breakwater – can be seen by the ferry and is made of vinalhaven granite!....anyway, Leif, Amy and I were celebrating mother’s day the day before mothers day with a walk on the breakwater in Rockland (5/13). Loads of fun and we even came across a group of about 10 purple sandpipers rocking their breeding plumage. Got a couple of shots to share… 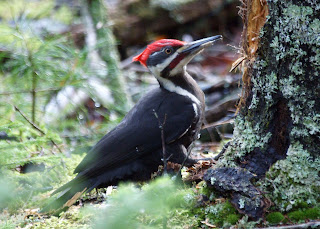 And then this pileated woodpecker put one a show for me on the nature trail right out my back door in St. George. That pecking is a force to be reckoned with! 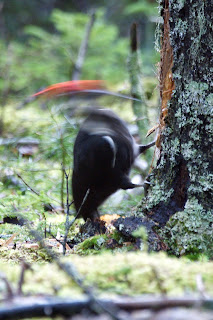 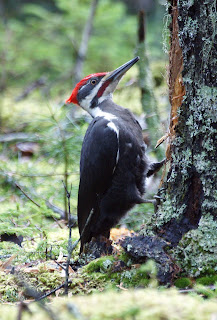 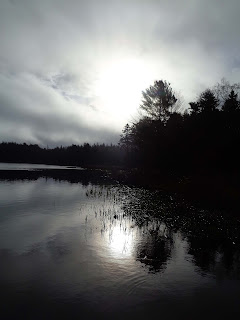 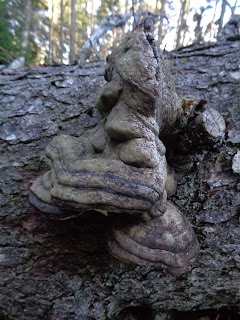 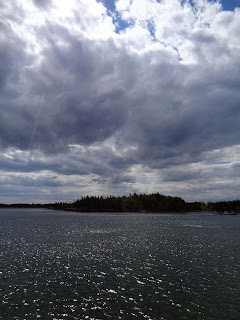 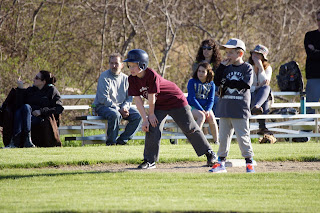 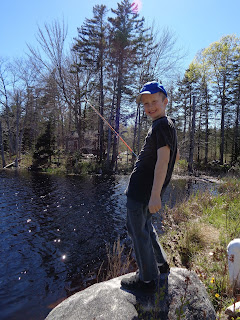 And here’s the boy fishing....

and playing baseball – getting ready to score a run!

And doing a belly crawl to sneak up on another 4 purple sandpipers we saw at Marshall Point Lighthouse! Good times!

Looking forward to seeing you out there!