Brought to you by VLT and MCHT 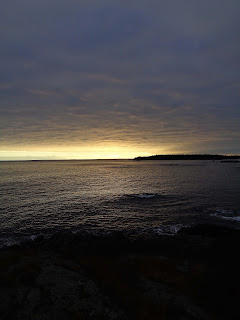 Business : contact us: with sightings, photos, or to get on the email list! vinalhavensightings@gmail.com is the place for us to be reached!


Tiit trick - Click on photos and they get massive! 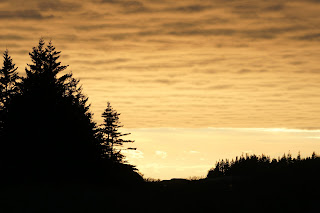 R.I.P. – Pat Gasperini. I met Pat when I subbed in the high school 11 years ago and always liked him. Good guy he will be missed. Our thoughts go out to family and friends.

Upcoming event - Don’t forget! – Friday, Feb 10th Full Moon Hike/snowshoe bonfire outing! Meet at Skoog at 4pm to carpool to Huber Preserve. For more info email me at the email above! An MCHT/VLT event! Like this blog!

Off island event – if you are on the mainland Saturday Feb 4th I’ll be leading a hike (hopefully on snowshoes) at Erickson Field in Rockport. 9am at the parking area about a mile up from 90/1 intersection. It will be an “off trail” excursion, but there will be lots to see, including this cool porcupine log.


The porcupine must have backed up into the root system of the log and left these beauties. Lots of winter mushrooms too. For more information on this and other MCHT trips : www.mcht.org/trips-events

Shameless nature blog plug – VSR’s “sister blog” (does that make us Big Brother?) sometimes known as “Maine Sea Bird Tours” or alternatively “Sightings From Skua” – both edited by John Drury (2 blogs! -how does he have the time?) – has posted a great article about (and great shots of) everyone’s favorite local summertime seabird –  the Red-billed Tropicbird. Click here and you are on your way –

Speaking of summertime, it’s never too earlier (but sometimes can be too late) to sign up for John’s Boat tours to Seal, Brimstone or just about anywhere you’d like to go in Penobscot Bay. Spring trips offer the chance to see Harlequins Ducks or maybe Great Cormorants displaying (that is when they are at their finest). Check out his blog for more info about when John’s boat “Skua” goes in the water!

John also sent in these photos of a snowy owl he encountered on Mount Desert Island recently. Thanks for sharing John! 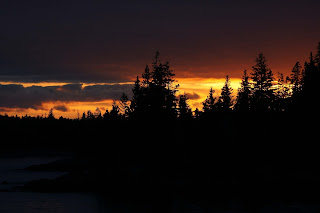 The story here…was the 143 Black-legged Kittiwakes loosely scattered in the middle of the bay. It took at least a few minutes for the ferry to make its way past the gulls which were all on the south side of the ferry. There was no big group of them, but instead they seemed to be spread out as far as my eyes could see through the binoculars. 143 is what I counted for sure, there were plenty of unidentified gulls (more than likely Kittiwakes) beyond where I could pick up detail. Best Kittiwake day I have had from the ferry since that 500+ day a few years back (maybe 6 now?). This could have been the case today, but that the birds were just out range. Good to see them!..... And the Thick-billed Murre just inside the narrows was sweet! Lots of ducks today as well – good numbers a good ride!

The story here…fun to see the group of Common Goldeneye displaying out in front of the Loring compound.  Seal Bay is great for winter ducks!

The story here…was twofold. Things seemed a little quiet when I started my search for pellets. No songbirds chattering at all, and with little to no wind it was surprising. That is until I spotted this Northern Shrike ( 1st Fold!) hunting from the tops of spruce. Suddenly it all made sense. There was a free roaming, aerial predator in the neighborhood. No place for chatter.


Shrikes are so cool, predator songbird – and unanimously voted the coolest of the songbirds (take that crow huggers!). Here’s a little bit from “the Sibley guide to bird life and behavior”…

“When a shrike sights prey, it leaves it hunting perch in swift, direct pursuit, seizing most prey items on the ground and dispatching them immediately. A shrike kills vertebrate prey by pounding its bill into the base or back of the skull and then using its hooked bill to sever the spinal cord between the prey’s neck vertebrae, as falcons do” – David Allen “Little Al” Sibley

Now isn’t that the coolest thing you’ve ever read about a songbird. Never mind their “butcher bird” habits, not many songbirds eat other adult songbirds. Coward songbirds like Corvids take non-fledged baby birds from nest, but no other songbirds are bad ass like shrikes.

Winter is the time to see them, and Lane’s seems to be the most consistent (yearly), and easily accessible place to check for them on island. And they are easy to find! Just check the tops of trees, their preferred hunting perches apparently. If one is around, they tend not to be too shy.


2nd fold) – Oh yeah, the other thing. Finding these long eared owl pellets made me realize that this is the 13th straight year Long-eared Owls have been documented at Lane’s Island. Undoubtedly they were a regular visitor to Lane’s for many years prior as well. Anyway, that’s pretty cool, I am very thankful for them. Thanks owls!

Some photos taken at Huber (1/20) of a fresh patch of one of my favorite mushrooms – Luminescent Panellus (Panellus stipticus) . This is the freshest patch I have come across on island (and possibly my life). This is the one that has gills that GLOW an eerie GREEN


Along the trails at night. 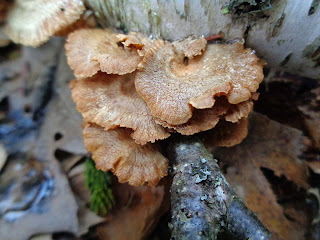 Excuse me David, I know you are “the swami of shrooms”, but man have you taken a closer look at these beauties! Let’s stay positive David! Not all mushrooms are for eating!

(Take one) “…we should be grateful for small glows, especially in the winter time, a time when (Panellus stipticus) often fruits…it’s produced only by the gills…the stem is often little more than a nub attaching the fruiting body to its substrate….” 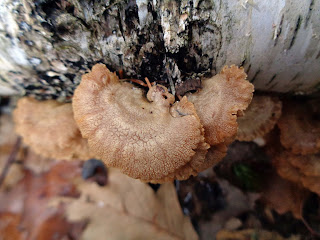 VSR Editor’s note - There is such a miss-mash of stuff Millman brings up, all out of it coming from a place of respect. I like the line about the “the stem (stipe) is often little more than a nub”. There is something different about the stipe for sure, and this nub description nails it for me.

(Take two) ”Local Chauvinism – Eat your hearts out, denizens of the British Isles. Your Panellus stipticus doesn’t glow at all, while North American fruiting bodies do. What’s more, specimens in the Northeast glow more obviously than specimens in other parts of North America”

Then he gets a little continental pride bashing on the “denizens” of the British Isles. Like there isn’t enough already to make the Brits feel bad about, now this – their panellus doesn’t glow as much as ours? I bet ours are bigger too!  Take that denizens! North-A-merica! North-A-merica! 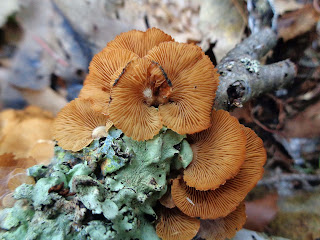 (Take three) “A Versatile Fungus – a photographic darkroom is the best place to see the greenish glow of a P. stipticus. Let’s say you’re fumbling around in the dark of the darkroom, and you have happened to cut yourself on a sharp object. Not to worry. The mushroom’s species name is derived from its former use as a styptic (BLOOD CLOTTER), so just apply an infusion from it on your wound, and you’ll soon be, if not golden, at least a lot less red”

VSR Editor’s note - Now for the darkroom conversation. Which reminds me of when a group of folks and I went into the bathroom at the Cobscook Community Learning Center with some panellus. We didn’t see the gills glow, but fortunately no one fell on a sharp object and needed to “just apply an infusion from it on your wound” – quick definition

Infusion - a drink, remedy, or extract prepared by soaking the leaves of a plant or herb in liquid

Ok , so if you are bleeding in a darkroom you should make a quick “infusion” of Luminscnet Panellus to stop the bleeding? I guess you are supposed to make it ahead of time, and be ready for anything like a scout. Sounds cool!

Are there non-important saprobes (decomposers)? Nice shout out the Panellus’ role in the forest, not sure what this is based on, but nice shout out anyway! And now for a few more mushroom photos!


On the mainland - (1/25) Erickson fields – after the ice storm and a relatively warm stretch the downed birch logs and stumps were loaded with fresh shrooms! In January! Love it. Take a look at these shots – starting off with more Luminescent panellus…

Jellies and other decomposers were out in force. 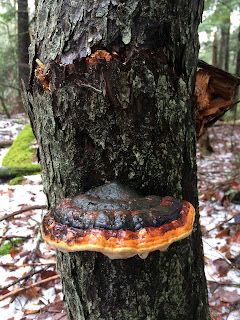 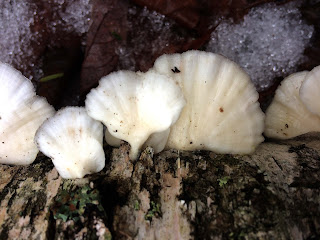 
mainland tracking - went to a new zone for me, St. George town forest from the Fort Point entrance

lots of sign of local use, good to tracks and trails of people out in the woods.

and even with the congestion and busyness of the trail, it took maybe a couple dozen steps before I found this fisher trail. 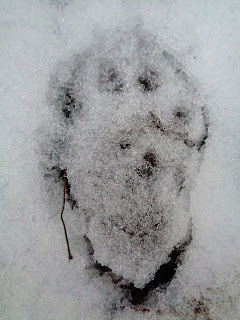 The tracks were exactly what I dreamed they would be - an otter in the woods. A small otter at that, probably a female fisher walked through. Way bigger than a mink. And just as wonderful all the same. walking on ice over puddles through the woods. business. good to see.

and now for a couple more leif