Thanks to MCHT and VLT for their unconditional support


“You are the guy who holds all the gross things!” – Olivia Philbrook, youngster 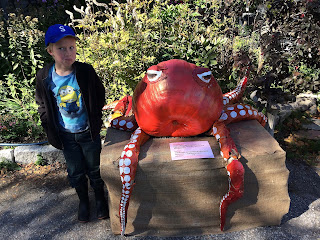 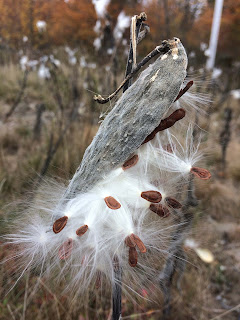 In honor – Lois Day passed away recently and our thoughts go to Lois’ family and friends, and especially Walt . A long time VSR supporter, regular contributor and wonderful person, in my mind Lois is legendary for sending in more Praying Mantis photos than anyone else and for a great laugh. She is missed already.

Business – firearm hunting season is upon us – October 31st - and youth day has already past! Do yourself a favor and wear ORANGE! No hunting on Sundays or any day on Lane’s Island.

Contact us! - send us your sightings and photos! You will be loved for it. vinalhavensightings@gmail.com !

Tiit Trick – click on the photos and they will fill you screen and your mind. Unless you are thinking about something else.

Thanks – to whomever put my sunglasses on the Basin Preserve sign on Wharf Quarry Road.

Kid Stuff – (10/18-19) – Perspectives afterschool program. Had a great couple of days with a bunch of the elementary school students exploring the woods, a dugout and a couple of school walls for spiders, salamanders and whatever else we could find.. So much fun.

The highlight of these days was Aiden saying he’s made a new friend (not me, a new student at the school). New friends are great.

There were spiders with egg sacs in their webs along the gutters on the school….

…And big ol’ Araneus genus orb weavers along the dugout.

This one was particularly awesome, and very patient with me and the group. Actually, that last sentence was me anthropomorphizing, because if spiders can feel fear or terror that is certainly what this one was experiencing rather than patience. Quite possibly this was the first time in its life that it has been hassled, and that’s all this really was., a momentary hassle.  Less than a minute total, but I digress…

And then we hit the woods for a lot of salamanders one day….

…and then a few salamanders the next day and a snake!


Thanks to P.I.E., VLT, MCHT, Vinalhaven School, ARC, the USO, HBO, and the late, great Sonny Bono. The beat goes on. Looking forward to the next time!


Myrtle warblers (lots & lots),Bald eagles dive bombing each other over Greens I., Loon flyover above Lane’s meadow, 4 Gannett sightings at the opening to the Reach, White-crowned sparrow, Merlin, Northern harrier

Greens Island – more from John…John Drury recently reported a Pileated Woodpecker and Northern Goshawk from Greens Island. It is assumed they were not together. Readers with "information recall" will recall that Patience Chamberlin recently reported a Pileated at Huber Preserve. Pileateds are not reported too often on island – wonder if this is the same bird or maybe a little flight of these jumbo woodpeckers are coming thru! 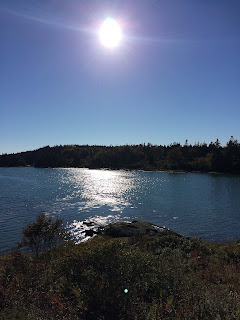 John also reported Ruby-crowned Kinglets singing. Nuthatches, Chickadees, Brown Creepers, and Golden-crowned Kinglets all have been singing as of late. Warm days can inspire! Remember when it was warm last week?

Around the island – Yellow-rumped Warblers (butterbutts) are thick and numerous these days, just like they should be!....Basin – lots of Greater Yellowlegs and White-winged Crossbills heard on every visit…Merlin over 4 dinosaurs ….

On the water – Northern Gannet – I bumped into Walt Day by the microwave tower and he mentioned “lots of Gannets up bay” chasing little Herring. Ever since Walt innocently mentioned that factoid it seems like everyone is mentioning seeing the largest regular seabird visitor to our region.


With its six foot wingspan Gannets are being regularly seen close to the ferry these days, seen from Lane’s, and seen just about anywhere you can see an expanse of open water. 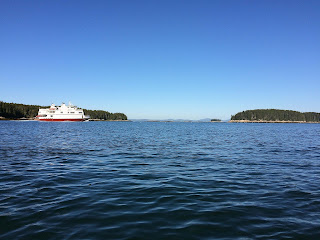 Little Herring – now I am no fish major, but the day after I saw Walt I kayaked out to Leadbetter and I was escorted by these little jumpers for good chunks of the way. Later I was informed that these were probably little herring being chased by Mackerel below and not the Great White Sharks that I was hoping to see. Check out this video.

or this one...
They were quite loud at times….loons and guillemots were also seen. No gannets in Hurricane Sound that day that I saw….. 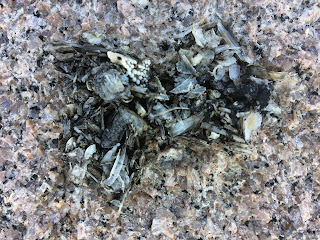 Leadbetter – OTTERS ARE EASIER! - The real treat for me was landing at a new spot on Leadbetter and finding otter sign almost immediately. There was a lot of “if I was an otter I would spraint here” kind of thoughts that turned out to be what otters were thinking as well.

In all about 10 new latrines, but the hugeness of it all was the three dens that I found in the first in being on the island for 45 minutes. The dens were flying very quickly – no den taking more than 5 minutes after finding a new latrine. It was one of those mornings. I can’t imagine a more efficient session with finding otter dens.

From the amount of spraint it is appears that a group of multiple otters is using the first two dens. For whatever reason – well, the obvious is to mark their turf – river otters love to spraint at latrines where freshwater creeks, trickles, drippers cross trails close to shorelines. Which is great, because those kinds of “trail and trickle conditions” are found all over the Fox Islands.

The first two dens were along the immediate shoreline with a clear, short path from the shore and den opening to the latrine. The first den also had a series of “runs”, or trails that the otters appear to use.

After finding a hefty latrine along a trail I will also look to see if there is any trail heading away from the shore. The third major latrine I found that morning had a clear trail heading up island, and I realized I had followed that trail several times before, I had just never approached the latrine from the south before! 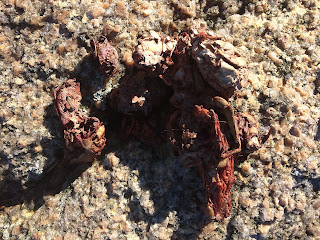 Anyway, this time I was more disciplined or “otter instincts” kicked in, but I found where I had lost the trail – or been tricked by a raccoon I presume! – And the otter had taken a quick left. And left a clear path to the den which had apparently been used for years! Amounts of spraint pointed to a single otter using this third den that was up and off the trail, the freshness of the spraint said that the single otter used the den less often – or at least less recent – as the group.

Super fun and super fun. This was done by 10:15 that morning. Meanwhile the afternoon before…..

Orchard Cove/Perry Creek – at about 1:15pm the day before kayaking – after seeing about a million Butterbutts I came across this otter latrine in the trail. I may have seen this last year, but was with other folks and didn’t explore for some unknown reason – otter instincts failure – but this year was totally different and better and all that.

The latrine being by a bridge tells you that both criteria – tickle and trail conditions – were met and sure enough the latrine showed a healthy amount of spraint. I scanned from the latrine for a trail and quickly found a well-worn path going up the trickle bed, so I followed it maybe 60 feet to a series of seriously leaning trees. The roots of these trees were being raised, but were still covered with earth, making it a perfect spot for an otter, or otters (“oohhhh”) to have a den.

And of course all paths led to three openings and another couple latrines on top and along the sides. Too easy!!!!!!!

For those folks keeping score, these 4 dens in 21 hours (I love my life!) are numbers 14-17 for the calendar year of 2016. The goal was 5! Now its triple digits. I bet with a little effort we could. A real “Big Year”, not that silly bird movie/book/lifestyle. Anyway, this is my second 3 otter den day this year (last three months in fact). One could say we are in a groove. 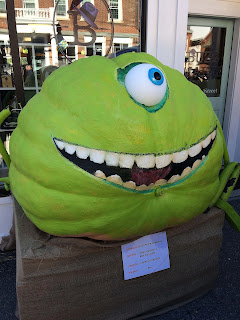 And speaking of grooves… 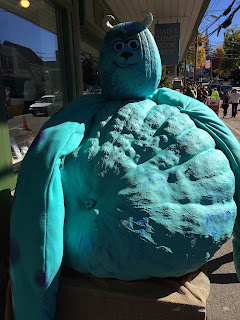 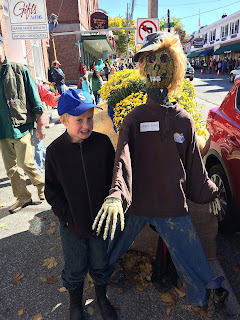 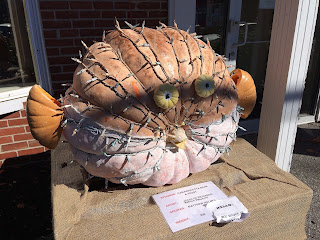 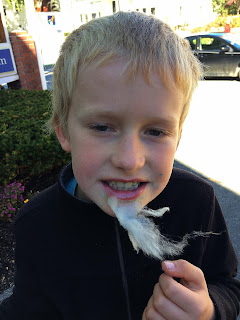 I have often wondered what exactly people did with those huge freakin' pumpkins that take up most of a garden and almost all of the nutrients from a neighborhood. In Damariscotta they paint them, which was very cool….


…and then they drop the really phat ones on a car and into a couple of swimming pools with no life guard on duty. Lots of fun and I got to see Sarah Post, an old friend of Aldermere Farm fame.

will have to do another one on mushrooms, out of time, out of mind on this one....

makes me sad - but see you out there doesn't!

Note on Monarch – (9/14) Mia Mather writes about her butterfly bush being “littered by Monarchs”. So nice to have them this fall!


Sightings – Patience Chamberlin had her “best birding of the season” (and she knows what “best birding” means!) last weekend on island. Here’s what she reported -

(9/30): My first pileated on VH at Huber.  A couple of Yellow-bellied Sapsuckers on Reach Rd

(10/1)Norton’s Pt rd.  AWESOME looks at yellow-billed cuckoo that flushed and landed at eye level in birch next to rd.

(10/1) State beach; 1 merlin= no shorebirds but tons of sparrows in marshy area…Song, Swamp, Savannah, White-throated.  Good numbers of swamp sp.  They must be migrating.


(9/29) – Last “bird walk” of the season - Folly Pond, Lanes Island and State Beach.  Rick Morgan (thanks for the report Rick!) and group saw/heard quite a variety of birds:

Lots happening out there! Here’s some more from Rick -

Ferry Ride to Vinalhaven – “Chuck from the ferry” reported seeing a Common Nighthawk fly over the ferry in the Reach recently. It was on the last run, as the day was transitioning into night (some might even call it “early” crepuscular). 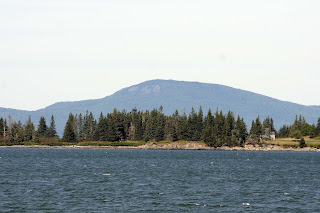 Right around sunset is a great time to look for these and many have been reported/mentioned to me recently from numerous spots along the mid-coast – Blue Hill, Mount Desert, Tenants Harbor even!


Ferry Ride to North Haven (9/29) – Cooper’s Hawk crosses the boat, Bald Eagle on the loaves, 10 Surf Scoter, Loons, Eider…the cool thing here was the eiders going into breeding plumage while guillemots and loons are coming out. 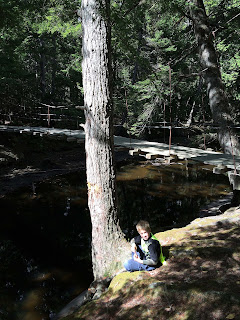 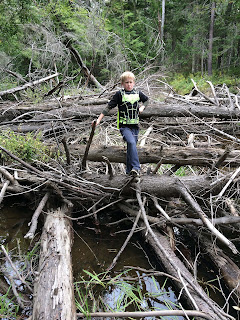 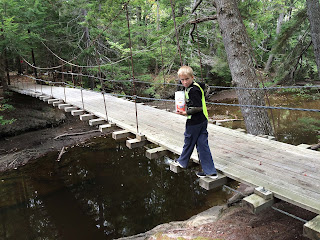 
see you out there!